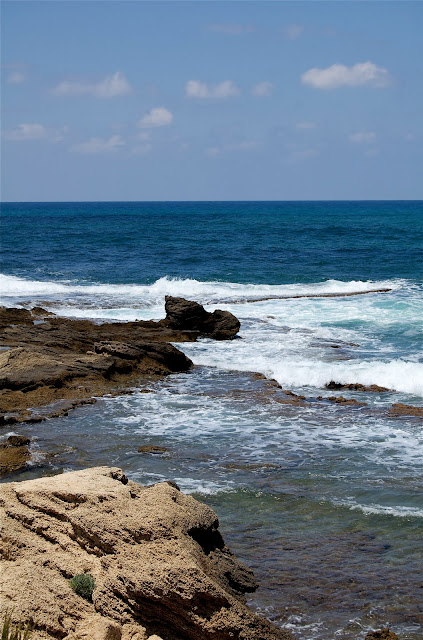 Our second stop for the day was at Caesarea Maritima (meaning by the ocean), the site of one of the most important cities, the Roman capital of the province of Judea at the time of Jesus, and later a Crusader fortress along the road from Acre to Jerusalem. This beautiful and important Roman city is strategically located in the middle of Israel, halfway between Haifa and Tel Aviv on the coast of the Mediterranean.
The Roman emperor, Caesar Augustus, gave the site to Herod the Great. Between 25 and 13 B.C. Herod constructed this magnificent Roman style city.  Caesarea encompassed 165 acres. It boasted a theater, an amphitheater, a hippodrome, palaces, public buildings, storerooms, residential areas, a harbor, an aqueduct, and a sewer system.
Below you will see pictures of the large Roman Theater that was built by Herod the Great .  This theater was three hundred feet in diameter and could accommodate four thousand people. According to Josephus, this is where the death of Herod Agrippa occurred, as recounted in Acts 12.
The theater is still in use today for concerts and special events. In fact while we were there, they were setting up the sound system and stage backdrop for a special concert later in the evening.
While some of the seats have been reconstructed of limestone, many of the blocks that support the seats are original. The acoustics are amazing, a testimony to their engineering. 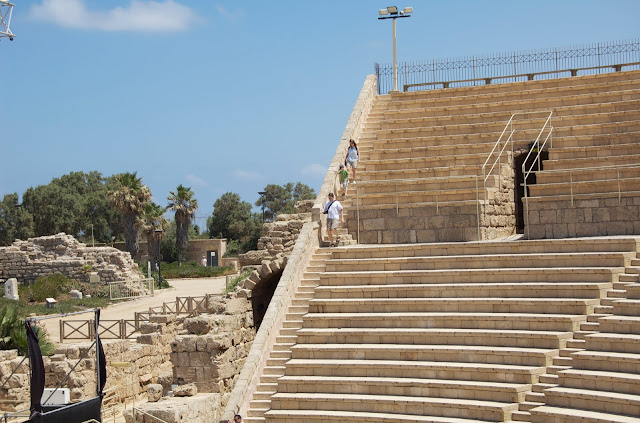 We stopped and sat in the theater while Christopher read Scripture pertaining to this city and Mark shared a few thoughts of encouragement.   We ended our devotional time by singing a hymn in this beautiful, ancient Roman Theater, built by Herod the Great.  Can you imagine?  Other tourists scattered around the site, hearing our voices, joined in from around the Theater, sometimes singing the hymn in their own language!  Really neat! 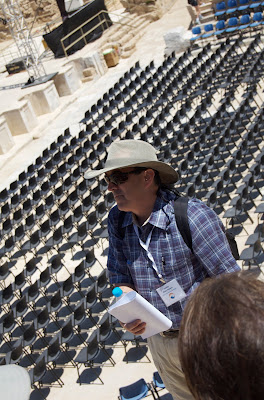 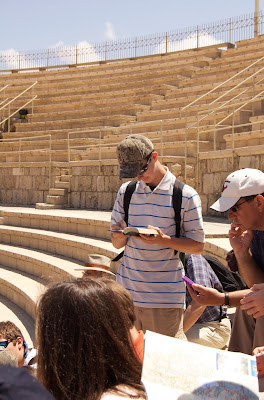 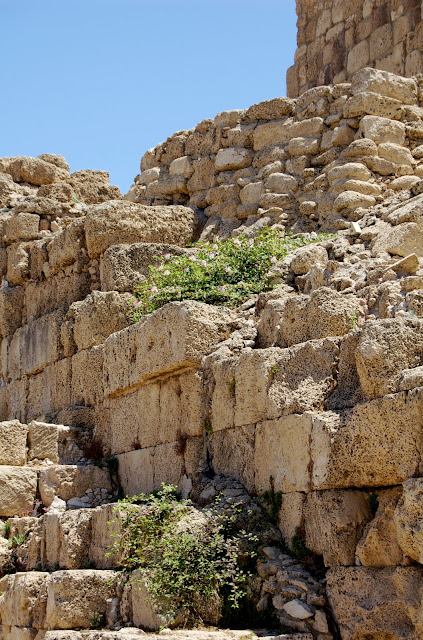 The architectural structure of these large Herodian stones supporting the theater is amazing.  It's hard to fathom how old they are and how much history they have witnessed! 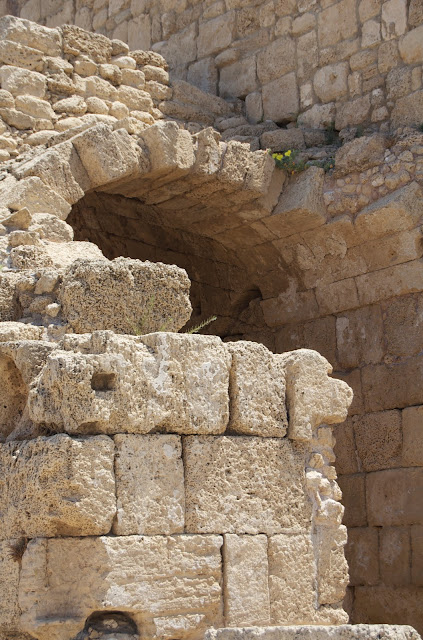 Just behind the stage of the theater is the beautiful shoreline of the Mediterranean.  Okay - I think I could live here.  The blues of the azure sky against the greens of the ocean is just breathtaking!  We all posed for pictures against the brilliant colors of the shoreline.  The wind whips off the coast and brings cool, refreshing breezes. We all wanted to skip the tour and go swimming - but that wasn't allowed.  It's just hard to believe we are really here! 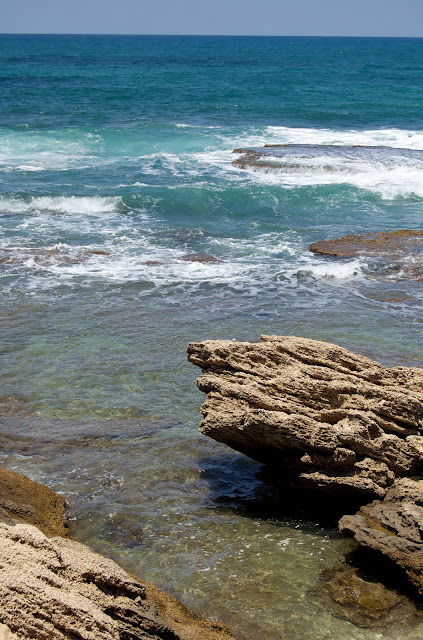 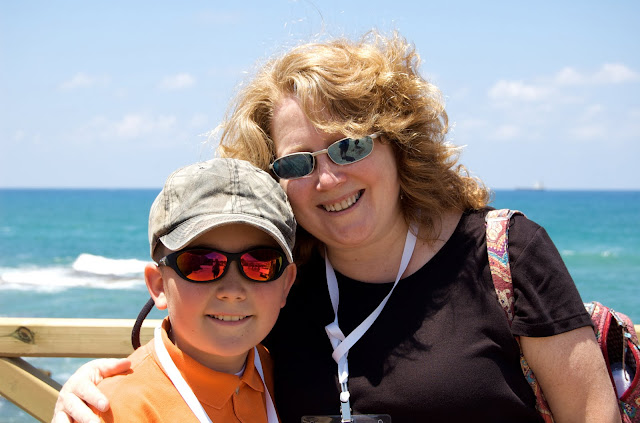 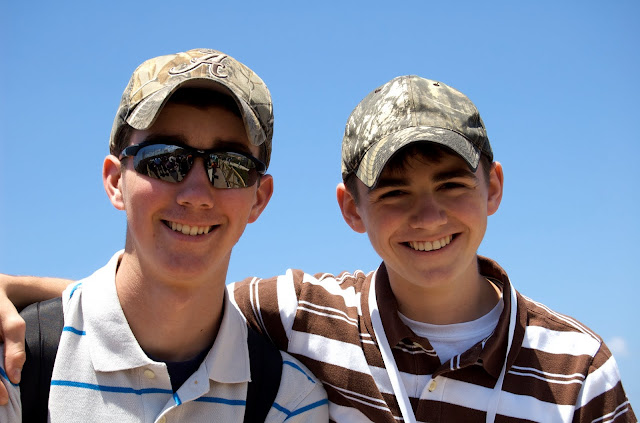 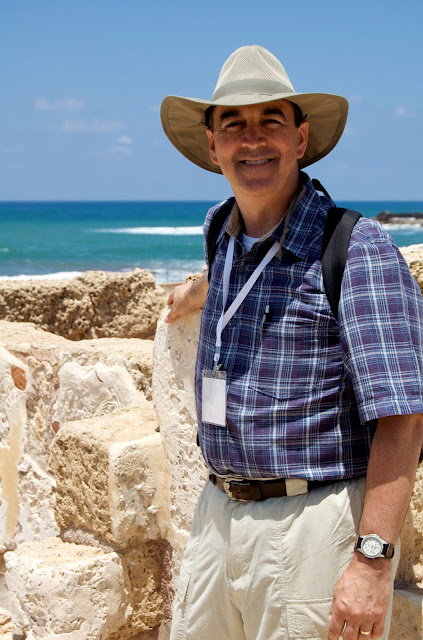 This is what remains of Herod's fresh water swimming pool which was situated within the walls of his palace.  Josephus referred to this as a "most magnificent palace" that Herod the Great built on a peninsula jutting out into the waters of Caesarea. The pool in the center of this opulent palace was nearly Olympic in size, and was filled with fresh water - even a statue once stood in the center. Paul may have been imprisoned on the grounds of this palace (Acts 23:35). 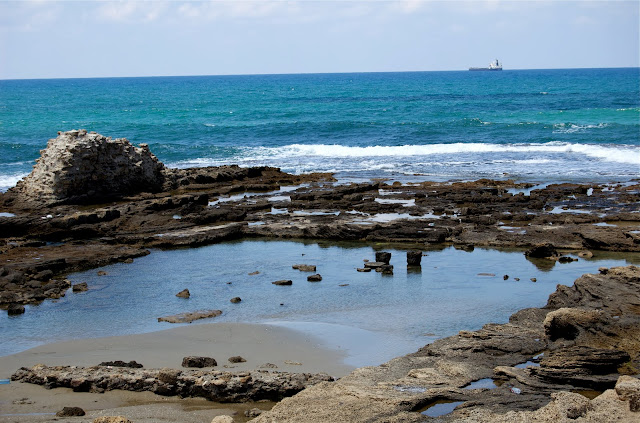 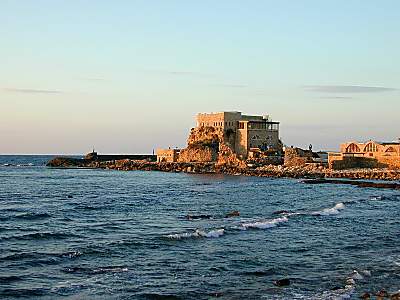 Herod's Harbor
I borrowed the above picture from the Internet of Herod's Harbor.  During bad weather, this could be a dangerous sector on the major shipping route from Alexandria to Phoenicia, Syria, and eventually to Athens and Rome. To provide a safe haven, Herod created an artificial harbor, constructing large breakwaters. Some of the stones used to build the harbor’s breakwater were fifty feet long, eighteen feet wide, and nine feet thick. He also used materials that allowed the concrete to harden under water to build this magnificent harbor which could accommodate more than 400 ships - much larger than the harbor which exists today. 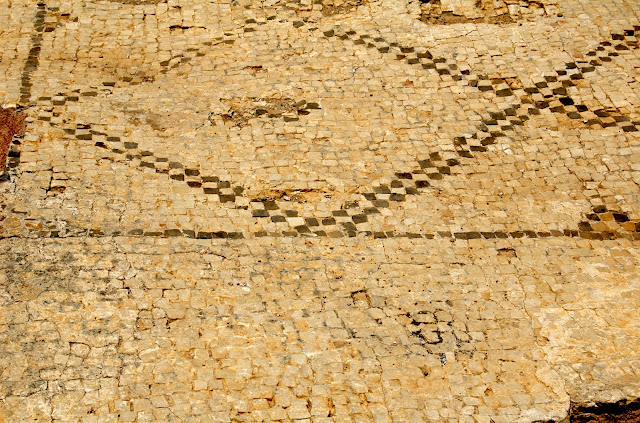 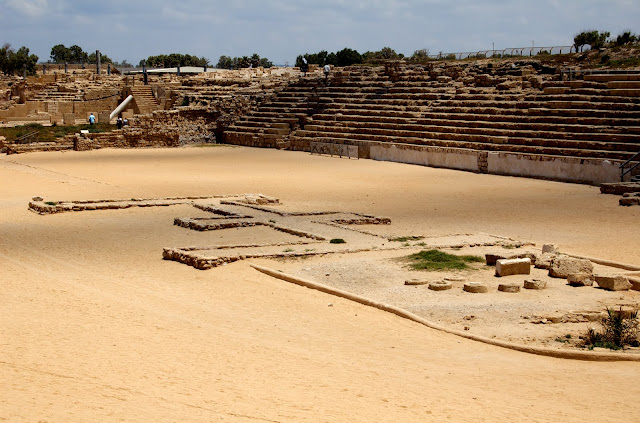 The Hippodrome
The hippodrome was a grand stand of entertainment built near Herod's palace in the shape of a U.  It had seating for 38,000 people, was 1500 feet long and 250 feet wide.  In this amphitheater, Romans conducted horse (hippo) races, special events, and games.  There was special seating in the central stage for dignitaries and their distinguished guests to watch the games.
Interesting note:  When the Zionists brought Jews back from Europe, they had to find jobs for all the men, some of whom were doctors and lawyers - but who now had no employment.  The government put these European Jews to work excavating historic sites.  Some of these men uncovered this hippodrome in the 1940's. 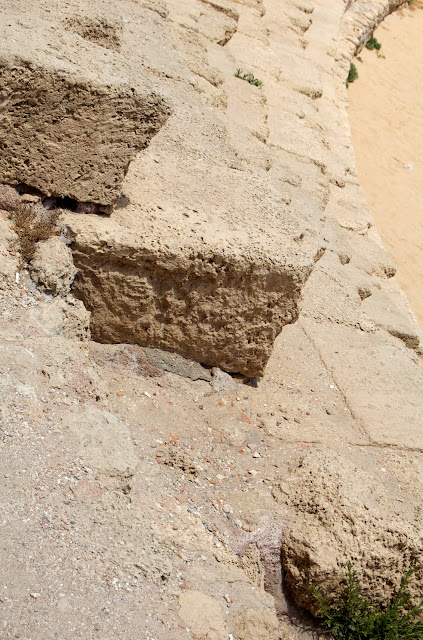 Seating at the Hippodrome 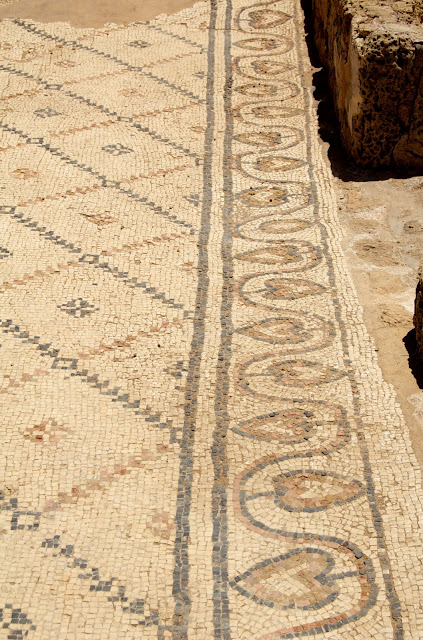 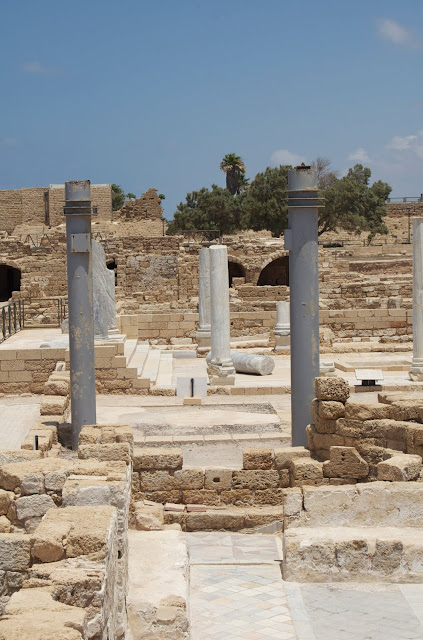 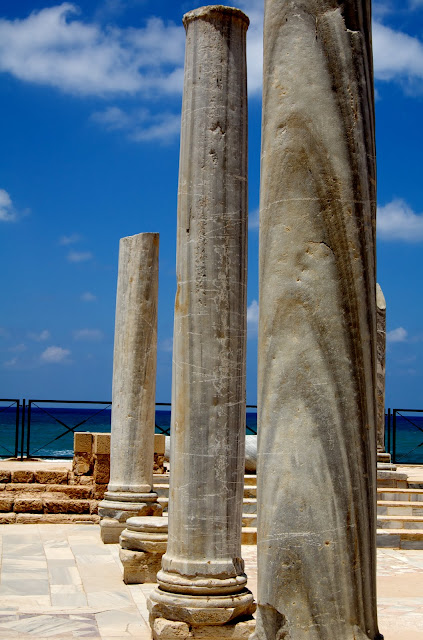 Herod spared no expense  - importing these fine floors and solid Carrera marble columns placed in Caesarea's public baths.  I imagine these marble items were delivered right to Herod's Harbor - via a 10 day ocean voyage from Italy. 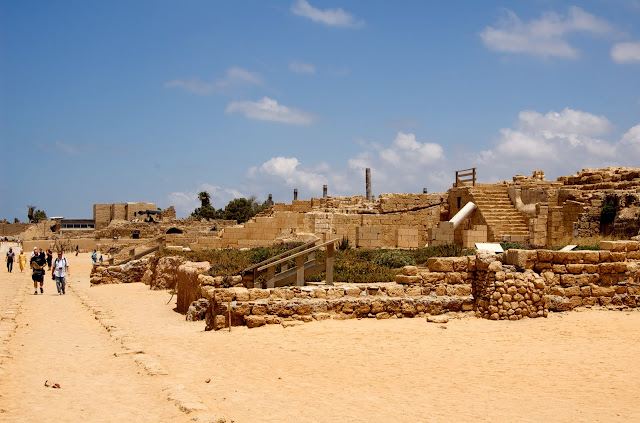 Ruins of houses and Gardens added later in the middle of the Hippodrome - prime land on the Mediterranean! 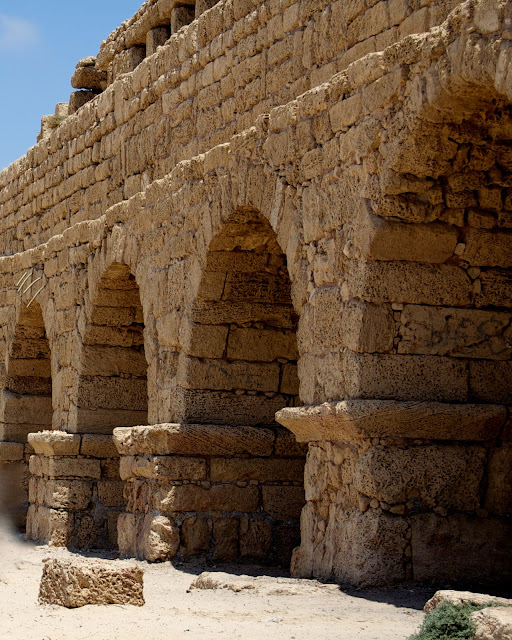 To supply Caesarea with fresh water, Herod built an aqueduct that delivered water from the fresh springs near Mt. Carmel, over 10 miles away.  Building the aqueduct on arches enabled the engineers to measure carefully and gradually grade the duct system from higher to lower in order that the water would flow by the pull of gravity. 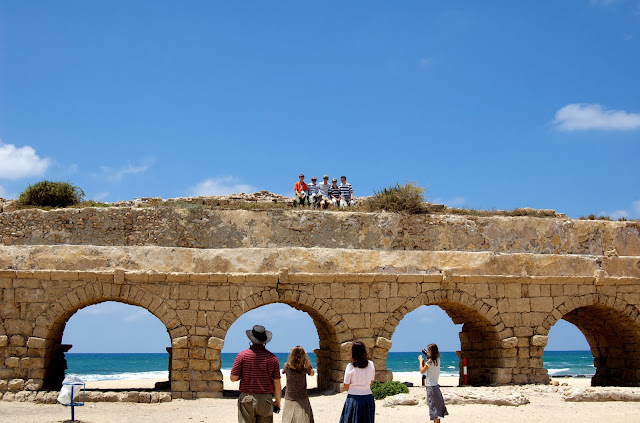 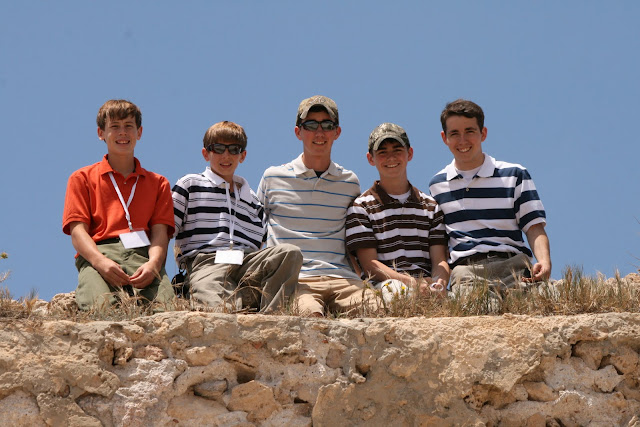 You know boys and rocks, if you can't throw them, you HAVE to climb them!  Where are all the ladies while the boys are climbing the aqueducts?

Checking out the Mediterranean of course! 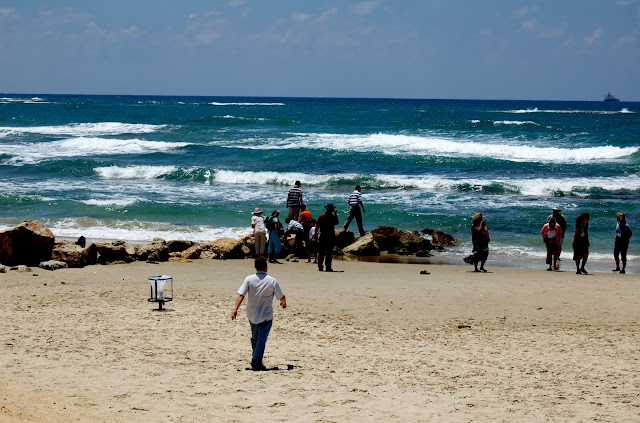 Wading in the Mediterranean Sea - Can we stay here?
Posted by Fiddlehead Mom at 1:00 PM